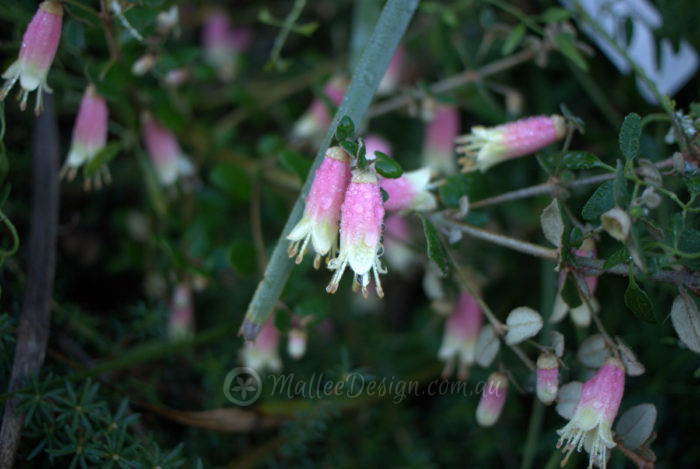 Ohhh my pretties! Correas are so, so sweet… sometimes I catch myself speaking to them using my special voice reserved for babies, dogs and small birds 😉 Correas were out everywhere in Tasmania when I was there last month, they are used on council verges, carparks and kids playgrounds and they look spectacular! The pink and pale yellow Correa above is Correa reflexa, this is the most widespread member of the genus and the most variable, growing from anywhere between half a metre to 1.5 metres high. Now heres where it gets even more confusing the image above is of a green form of Correas reflexa, isn’t it beautiful? This Correa grows naturally along the east coast of Tasmania and can get uptown 2-3 metres high. Correas grow well in Tasmania due to the low humidity in Summer and often naturally well drained soil, I saw several examples of them hedged into low borders and medium screens. In the image above you can see Correa ‘Ivory Bells’ which  is believed to be a hybrid of Correa alba and Correa backhouseana, both of which grow extremely well in the southern states.

One of the reasons I adore Correas is for their small bird habitat appeal and also as a food source for insects and small birds. Here is one that does grow quite easily in coastal NSW, Correa alba, this Correa has the least bell like flowers of all the species, the pretty little white flowers open up like stars amongst the grey round furry leaves. Correa alba grows well in sandy free draining soils in full sun to part shade and can be pruned heavily into topiary shapes if you so wish. And last but not least one of my favourites Correa ‘Dusky Bells’, this is a low growing Correa with luscious green leaves and deep pink to red flowers. It has a naturally dense habit which doesn’t require much pruning to stop it looking ratty. I hope I have inspired you to plant some Correas in those difficult dry shady spots or out in the open if you are in a low humidity area of Australia, I’m sure the birds will thank you for it 🙂