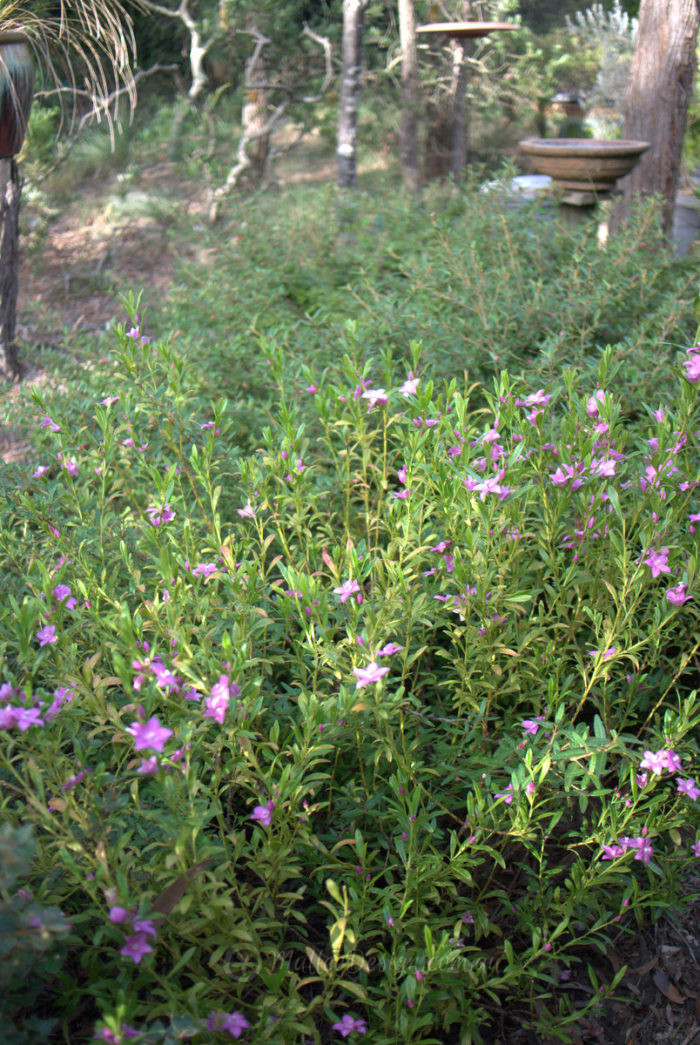 I spent last weekend in Mount Victoria, staying in a log cabin surrounded by a wonderful bush garden. There were plenty of Banskias, Eucalypts and Acacias but what really filled the garden out were the swathed of Correas and Croweas planted densely under the gum trees. Both Crowea and Correa species like to grow in part shade in a free draining soil, they also both greatly dislike humidity and will withstand very cold Winters and dry summers. The above two images are of Crowea saligna which grows naturally on a Sandstone soil around Sydney, it flowers often and is the larger flowering of the Crowea species. The other delightful Crowea is exalt, it has a fine leaf and smaller flower but tends to be a little hardier. Both species grow to around half a metre to a metre high and are covered in bright pink showy flowers. Croweas look great planted by themselves as a specimen to brighten up a shay corner or together with other low growing natives to give a cottage garden feel, such as Correas! I LOVE Correas but have had limited luck growing them in my seaside garden, they really dislike our humid Summers. A couple I have had success with are below. The Correa tend to attract nectar-seeking honeyeaters in summer when not as many other food sources are available to them. Of course the first is good old Correa decumbens, the flowers aren’t much to look at but the dense spreading habit is very useful in a dry shady spot. Then there is Correa ‘Little Cate’ this Correa gets to about half a metre high and has almost round dark green leaves and sweet little pink flowers, and so far I have found it to be very forgiving. Correa glabra is a very useful shrub, it gets to about a metre high and the same wide, you can prune it into an upright shrub or let it ramble around the garden. Thats the end of my tuffies next there is Correa lawrenceana, I am a little obsessed with this Correa it gets tall too like glare but it has these large furry leaves and funny shaped flowers. A big drawcard for me is the rusty stems and the brownish underside of the leaves, this is a great Correa for the small birds because of its height. I really must try growing it and I will let you know if I have any success. The last Correa I haven’t tried, it is called Correa ‘Canberra Bells’, I think it is one of the most beautiful Correas available and I’m pretty sure you would need to have a garden in a Canberra-like climate to grow it. Correa ‘Canberra Bells’ has these small fat lemon and red flowers which stand out like tiny beacons in the understory, it is the showiest Correa flower I can think of. It can get upto a metre high by a metre wide but is also happy to scramble about in the shade.
I wish I lived in the mountains where the Croweas and Correas could happily coexist, alas for the moment I will just have to appreciate them when I am on holidays, dainty little things 😉