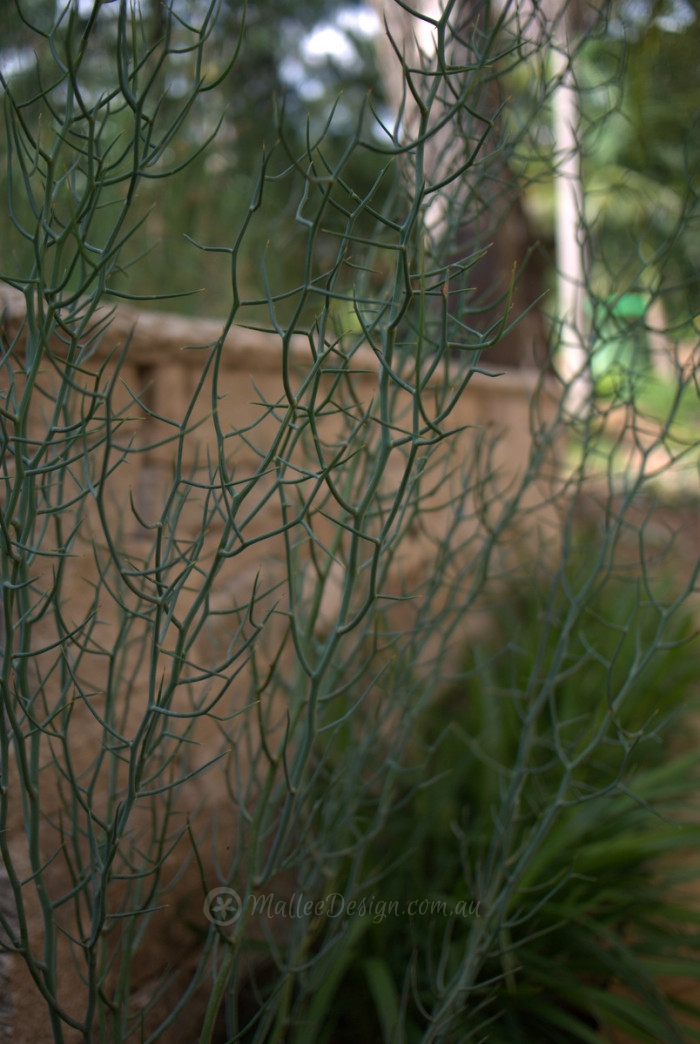 I am really enjoying watching the garden settle in,

thank you for all your efforts

This is Stage 1 of a garden I am working on in Gordon in the northern suburbs of Sydney. The front garden went in about 6 months ago and has flourished over the summer months with the loving care of the owners. The brief for the front was to create a native garden using native species that reflect the indigenous plants of the area. The client is a dedicated bush regenerator and environmentalist and wanted the front of the garden to appear like a manicured and cared for bush garden. The front verge has been included in the garden and completely mulched, there is a re-cycled sleeper entrance pathway for parking visitors, a line of sawn sandstone that gently indicates the front boundary. The image above is of the front garden with its original planting, mainly Lomandra longifolia, which was removed as it had become a mono-culture. The garden has many mature Native Palm trees which were to be retained, therefore the plant choices for this garden were dictated by the tropical foliage of the Bangalows and Lord Howe Island Palms.
Large leaved Doryanthes palmerii, Dianella ‘Little Jess’ and Hymenosporum ‘Luscious’ were used to tie everything visually together. The main front garden bed was raised slightly to give privacy upon entering and exiting the house, it is a large mound and once the plants grow up to their mature heights the pathway will wind down behind it and become even more discreet.
There are also 6 mature Eucalypts in the front garden with another two Scribbly Gums newly planted, meaning this is an under storey planting with part shade for much of the year. I used many dwarf species in the front garden, mainly as they have a compact and striking habit but also because natives like Pimelea linifolia, Dianella caerulea and Banksia spinulosa are found naturally in the surrounding bushland and by using culitvars of these species the garden will still retain a connection with the natural habitat. Above you can see Banksia ‘Coastal Cushions and Pimelea ‘White Jewel in the nature strip. A beautiful rain garden has been built opposite the front door which has been planted out with Juncus usitatus and Baloskion tetraphyllum. It receives rainwater from the storage shed which filters through the high nutrient sand. There is also a large number of pots and planters in this garden as there are many patios and outdoor paved areas. Near the front door is a leafless Acacia aphylla best grown in a pot on the east coast. Above is a photo of Acacia ‘Waterfall’ as a low grafted Standard. The collection of pots above hold 2 x Acacia ‘Limelight’ Grafted Standards, 1 x Libertia paniculata and a Philotheca difformis ‘Starsprite’.
Building in the central courtyard garden is currently taking place and then a re-working of the rear bushland garden will be the last instalment. Stay tuned.