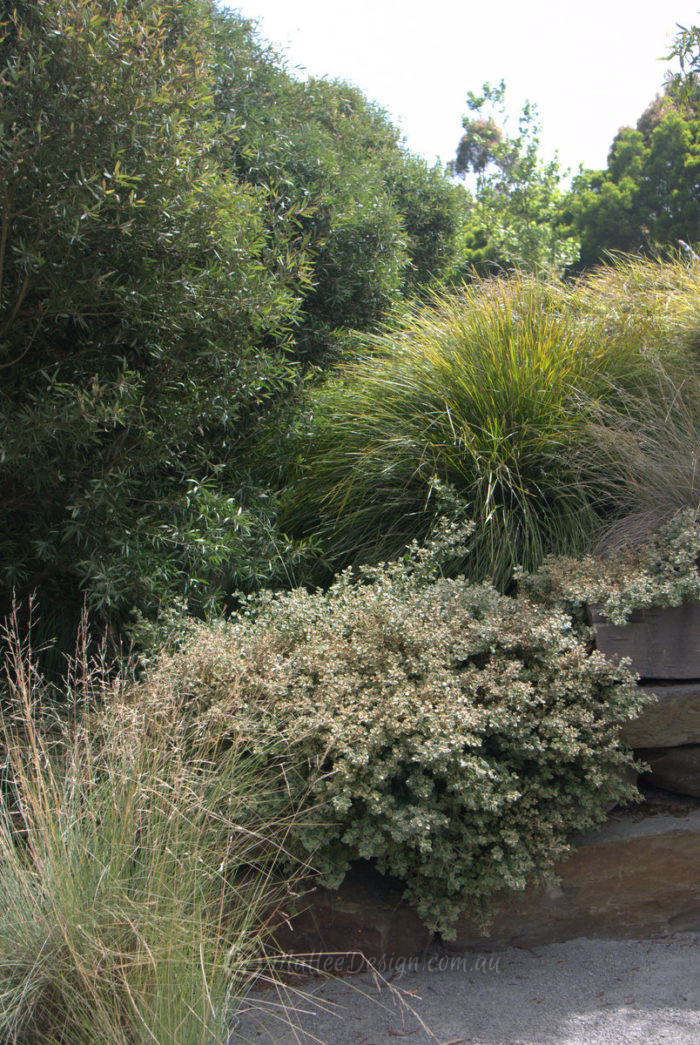 I went to the Mornington Peninsula in Victoria in January this year to see three gardens designed by one of my favourite Landscape Designers and of course they did not disappoint. In fact  I realise now that I took so many photos and was so inspired that I have been a bit overwhelmed by how to approach writing blog posts about her gardens. I think the only way for me to process all the photos I took is to simply talk about her use of native plants in her designs, thats my passion right? Fiona Brockhoff by no means limits herself to a native plant palette and all the gardens I visited were quite repetitive in the species used, however the their placement and maintenance shows how much of a plantswoman she is as well as a designer. In the image above you can see Correa reflexa var. nummularia falling over a retaining wall with a back drop of melaleuca quinquenervia.  I have tried growing this beautiful Correa in NSW but only had any luck in a pot, it hates the humidity! This large rural garden was stunning, it was positioned around a central lake with a small gravel beach and jetty. It also had the most wonderful outdoor bath I have ever seen. Melaleuca quinquenervia was used as a privacy screen for the bath and shower area, in the foreground you can see a mass planting of Poa labillardieri with Lomandra ‘Tanika’ in the background. The image above is of the seating area on the edge of the lake, I have just included it because I think it is impossibly luxurious 😉 These are the stone steps leading down to the waters edge, I love the Anigozanthos ‘Big Red’ and Correa reflexa var. nummularia hugging the edges. The planting around the house was a little more formal, with clipped Correa baeuerlenii spheres, gravel pathways and some more exotic species. In the images above you can see Lomandra ‘Tanika’, Correa baeuerlenii, Melaleuca nemophila and Phormium tenax. The gravel pathway is offset with varying steppers made from slate, timber and stone, in the foreground you can see Themeda australis in full seed, so pretty! In fact there are many trees planted close to the building, a cluster of Allocasuarina verticillata completely wrap themselves around the house as a wind break, creating a gentle understory filled in with grasses. In the image above you can see Lomandra ‘Tanika’ and Correa baeuerlenii growing happily in the shade of the Casuarinas. In fact I think this pathway was one of my favourite spaces in the garden, the mounded garden beds with dropped path gave a sense of security and safety. And I know that Lomandra ‘Tanika’ is perhaps one of the most boring grasses in the world, but look at it here, isn’t it inviting? I hope these images portray in some way her exceptional use of native plants in her designs, it truly felt as though every plant was positioned in an appropriate place and fulfilled its role in the overall design.