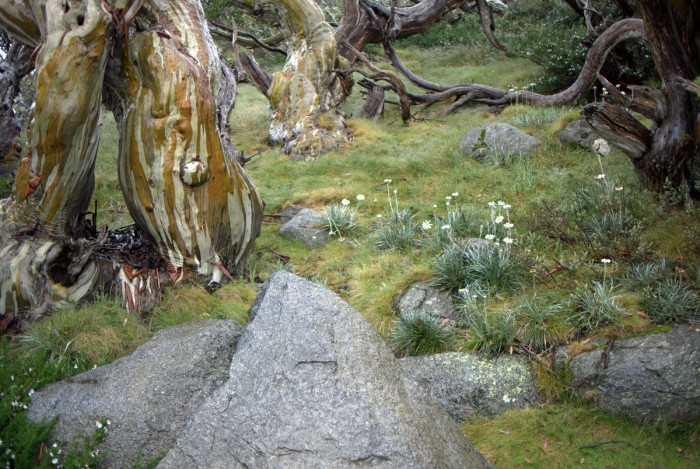 I went walking in the mountains and what did I see?…..loads of amazing flowering natives hooray! I have been waiting for months for the summer so I could go to Mt Kosciuszko National Park and check out the wildflowers there. I have only been once before and it was for a very brief ski holiday. One of my favourites that I saw everywhere, both up onto of mt kosciuszko  and Charlottes Pass, but also growing happily in the lower valleys was Ozothamnus secundiflorus. The snow and winds had shaped it into a lovely dense silvery shrub, covered in bee attracting white flowers. The Prostanthera cuneata was absolutely prolific, especially growing up under the snow gums (Eucalyptus pauciflora subsp. niphophila) on the summit. See image below. I was completely blown away by the landscape at the top of the Mountain, it made me sing ‘the hills are alive’ from the sound of music 😉 There were plenty of Celmisia costiniana, fields of them …. The daisies were mixed in with plenty Euphrasia collins or Purple Eye-bright. Then there were the  Pentachondra pumila or Carpet heath, growing in the damp spongey soil or on the rocks, apparently this has an edible berry but it was a bit early for it to be fruiting 🙁 it would look really amazing with juicy red berries all over it. I was also too early for the paper daisies and only saw a limited amount of Billy buttons too, but what I saw made me happy! Craspedia aurantia below. A little further down the mountain, the plants got a little taller with the protection of the Eucalypts, I saw Mountain pepper (Tasmannia lanceolata) in the wild for the first time, no fruit though as they need a male and female and it was the wrong time of year. I have never seen it look so vibrant, luscious and thick. Another shrub that was growing dwarfed and naturally pruned by the weather was Lomatia myricoides. I LOVE Lomatias, such versatile plants. For me the leaves and flowers appear too delicate to withstand heavy frost and snow, but apparently it thrives in sub-alpine areas of Australia. Of course the star of the show for mewas the Snow Gums, when we were walking from Charlottes pass it was pouring down with rain, this only made the gums more beautiful by bringing out the colours of their bark. There are many other amazing alpine species I saw and I am slowly going through and try to ID them correctly, I can’t wait to go back in a few years maybe more towards the end of January or early February, to try and catch those things I was too early to see flower. 4 replies on “I went walking in the mountains…”