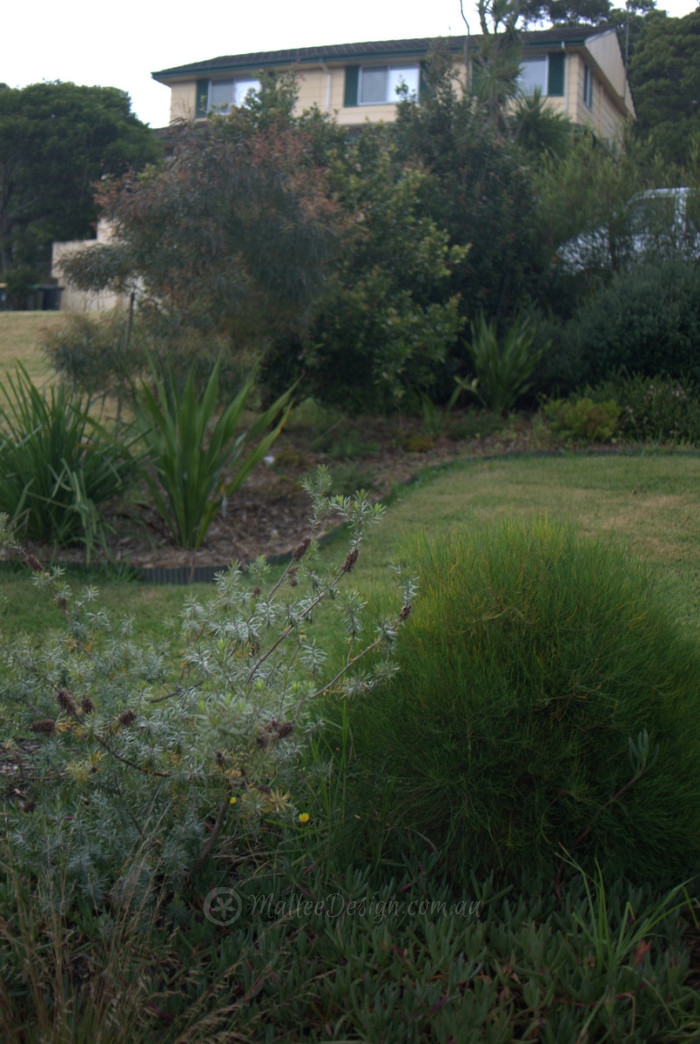 I have been consulting on this coastal garden for about 3 years now maybe a bit more, and it has really begun to settle in, some of the growth especially in the rear garden is amazing. The client has installed a beautiful mosaic letterbox made by his sister, it is large and bright and a little like a beacon marking the house on the windy road. Just beautiful.

There are four main sections to the front garden as it is steep and has a driveway running up one side. Three garden beds have been created to shelter the house, give privacy from the street and break up the driveway. In the image below you can see the verge garden bed on the bottom right and the middle garden bed with the signature letter box. The middle garden bed is made up of layers, with a back drop of Grevillea ‘Bulli Princess’, then Westringia spps and then low growing  Grevillea spps and Banksia spinulosa Dwarfs. The front verge garden bed has Casuarina ‘Green Wave’ as the backdrop then Kunzea baxteri ‘Scarlet Jack’ and Callistemon ‘Candle Glow’ with some Juncus usitatus and Carpobrotus as ground cover. This area has been problematic, due to receiving a lot of storm water run off when it rains, the soil is a fairly heavy clay and the plants need to cope with temporary inundation. Unfortunately the Kunzeas were 6 and are now only 2 🙁 The long garden bed that runs down the side of the driveway has really taken off, plants are now being removed to make room for the more vigorous species. The Melaleuca hypericifolia and Grafted Flowering gum have done particularly well, both have stood up to the strong coastal winds and clay soil. The rear garden I would classify as 2nd or 3rd line coastal as it is quite protected from the house and neighbouring houses. It is a large garden and the need to screen a 2 metre high cyclone fence near the house was the most urgent. We used several layers of plants to do this, taller species to the back included Leptospermum ‘Lemon Hedge’, Leptospermum laeviegatum, Trema aspera and Syzygium and Acmena spps. In the mid section for screening Ozothamnus diosmifolius and Grevillea spps. were used and for the foreground Correa alba, Juncus usitatus and Poa labillardieri. One of the stand out plants for me in this garden that has thrived under difficult circumstances and just continued to look lovely is Baeckea imbricata, commonly known as heath myrtle. This plant grows to 1.5 metres high and about the same wide and will grow in a variety of locations, right up on the cliffs next to the ocean. In cultivation it forms a dense, luscious green shrub with upright foliage and plenty of flowers in Spring/Summer. Next for this garden is extending the screening planting on the other side to the rear of the property, where there is a large stand of indigenous Eucalypts. The next-door neighbour is an apiarist so we will be planting plenty of bee attracting natives for honey making.