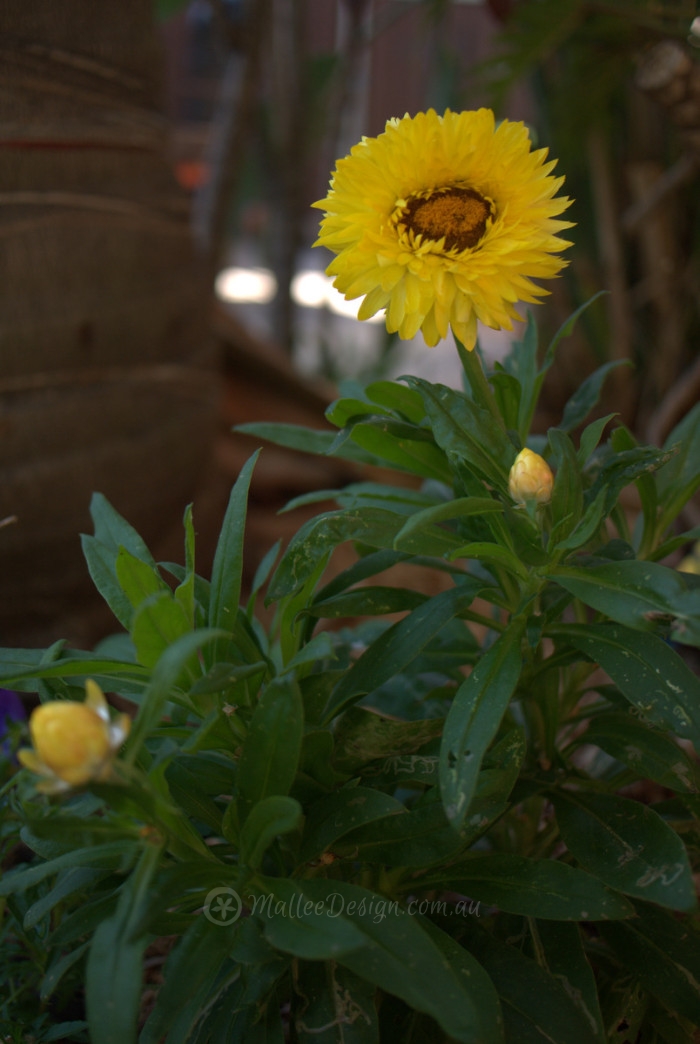 I was given the pleasure of helping to build part of my daughters pre-school garden last year, they had a drawing from a few years back and hadn’t been able to afford to do anything with it. They are a not for profit Pre-school and have a wonderful base of talented teachers and passionate parents. The garden area to be worked upon was mainly in fairly heavy shade due to a tall Lilly Pilly hedge, these trees also suck most of the moisture out of the garden. A dry creek bed was created winding under this hedge with several places for crossing created by salvaged logs and log rounds from a local tree lopper. Some of the native plants we retained were, the Doryanthes excelsa, Cyathea cooperi and a stand of large Archontophoenix cunninghamiana, which you can see in the background on the left. A small camp fire area was made in the centre with logs for seating, this area has been hugely successful, both children and adults are drawn to sit around the fire pit even when it is not lit. Fires are made to cook damper, potatoes and fresh corn. A small arched bridge was built by locals from the ‘Mens Shed’ who also fixed up the roof to the cubby house. The timber for building these structures, river pebbles, plants and some geo-fabric were the only things purchased. The garden was built in 3 weekend working bees and is a testament to what motivated volunteers can achieve. In the image above you can see some salvaged plants that I planted for the difficult position, Adenanthos x cunninghamii,  and Anigozanthos ‘Landscape Yellow’, these get fallen on and trampled all the time and act as some what of a soft fall for the concrete. There was a very dead space next to the back deck in which the children wanted to utilise, I planted Leptospermum ‘Lemon Bun’ and Prostanthera ‘Minty’ here to create a scented passageway. Another very useful plant that was used for growing underneath the lilly pillys and Bangalow Palms was Sollya heterophylla White, this plant not only has pretty bell shaped flowers but also has an attractive and edible, oval blue berry that are formed in autumn. Most of the native plants I used in the  garden were bush food plants, above you can see a very happy Bulbine bulbosa planted on the edge of the frog pond, this is otherwise known as the native leek and has edible tubers. The children love playing with the river stones and you now find little sculptures everywhere, kids really don’t need anything too complicated to encourage outdoor play, this small garden meets most of their needs. Another hit was the hedge tunnel, see the image below.