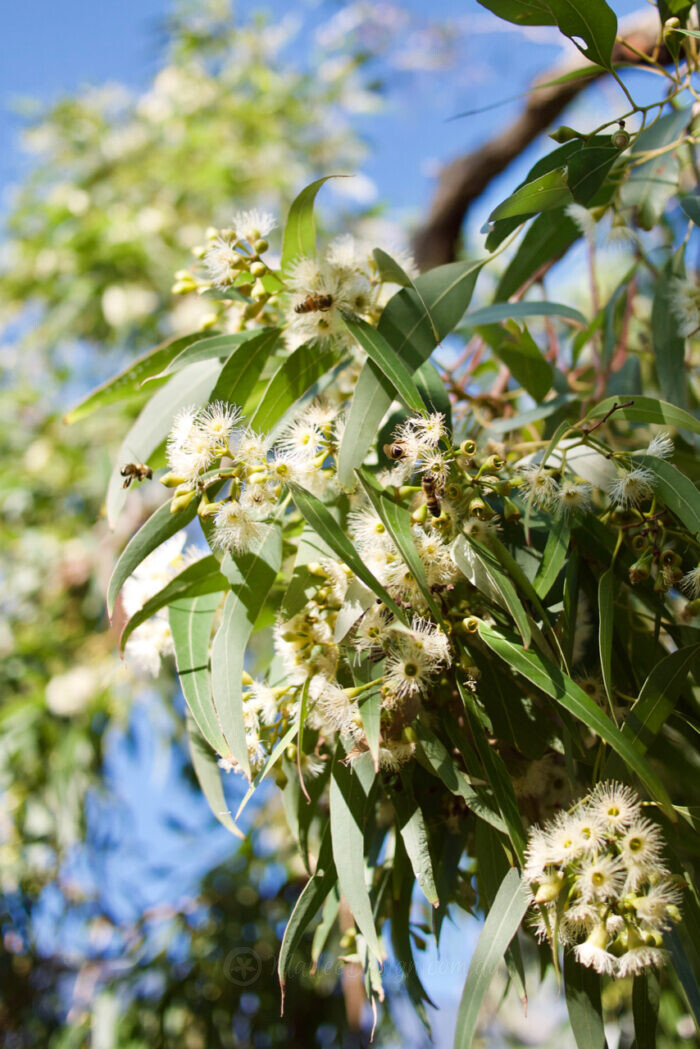 Bees play an important role in our ecosystem and we rely heavily on them to pollinate our food crops and our native bushland, not to mention supply us with delicious honey.

There are over 1,500 native bee species in Australia with a whole host of interesting shapes and forms. Bees feed on nectar nestled within flowers, provide pollen to raise their young, and play an absolutely crucial role in pollinating plants as they hop from flowerbud to flowerbud. Sadly, native bees are declining or have gradually been displaced. This has led to a reduction in native flora pollination and an increase in the pollination of weeds.

There has also been an sharp decline in honey bee colonies around the world in recent years, and the reasons for the drop remain largely unknown.

Some natives like the blue-banded and carpenter bees do a special type of ‘buzz pollination’ where they wrap themselves around a flower and vibrate their bodies so that the hidden pollen capsule explodes out of the flower like fireworks!

Whereas some pollinators only require nectar and/or pollen for part of their lives, bees need these honey ingredients throughout their adult and larval stages. To accumulate one kilogram of honey, bees will have pollinated a million individual flowers and flown over 50,000 kilometres.

We can all do our bit to support these pollinators. Why not plant flowers rich in nectar, which will help bees find the food they need?

The first thing I think about when creating an attractive habitat for bees is plants with different flowering seasons. This makes sure there’s a constant source of nectar for nearby colonies and all year round bee activity. Native stingless bees (Tetragonula) only forage close to their hive so having year-round flowering plants is essential for attracting this species and great for many other species too. At the end of this post is a list of native plants, grouped by flowering season, that are great for attracting bees to the garden.

I also consider the colours of the flowers I’m putting in the garden. Bees have a different range of colour vision to humans, they can’t see red but can see all the way into the ultraviolet spectrum and distinguish between individual flowers much more readily. They are particularly good at locating blue-like hues so plants with violet, blue, purple, mauve, white (white flowers are often overlayed with UV patterns) and yellow flowers are very attractive to them. Not to mention the other insects, butterflies, beetles, wasps and crawling critters that are attracted to these colours and will additionally pollinate lots of flowering plants!

Something that’s not as often considered when creating bee habitat is their thirst – on a hot day a colony of bees can drink over a litre of water between them. Water sources that aren’t too deep (bees will easily drown if they fall into deep water) and have floating platforms like sticks, cork and leaves are a good idea to have placed somewhere in the garden, maybe under some shade, so the water doesn’t evaporate too easily.

Another interesting thing about bees is that some have longer tongues or specific bodies that are able to pollinate tubular or bell-shaped flowers found on plants like Emu bush (Eremphila) above, Correas and Epacris sp. Other bees have short tongues and are specialised at pollinating shallow-cupped flowers such as those of Eucalypts – the honey bees in the photo below are loving Eucalyptus citriodora ‘Baby Citro’ Grafted.

The whole bunch of factors to consider when planting a garden for bees – flowering seasons, flower colours, shapes and forms, as well as water – might sound overwhelming, but creating habitat for bees starts to happen almost organically when you start paying attention to just one or two of these most of the time. I find it easiest to start with flowering season so summarised here are some of my favourite native plants to inspire bringing more bees to the garden.

Note that for some of these plants the flowering time will cross over multiple seasons. I’ve put the main season of flowering in the categories.

One reply on “Bee Friendly Gardening”