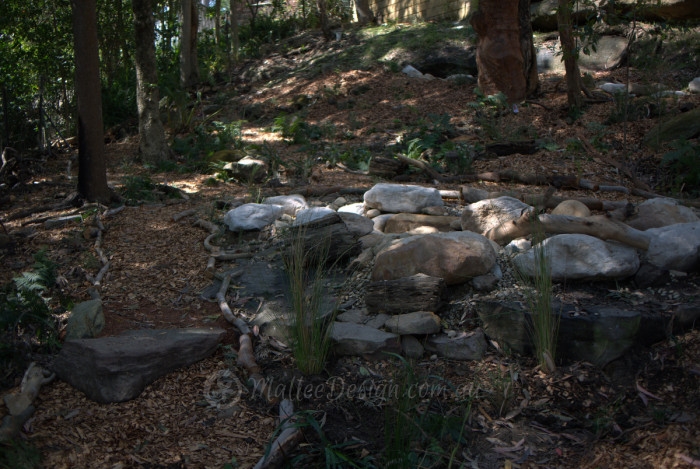 This is stage 3 or the final stage of a large garden I have been working on in Gordon. The rear of the property backs onto bushland which is quite weedy, the space itself held several large indigenous trees but not much else.

The site is steep with a sandstone drop where some very well built stone steps had been created for access to the lower garden. The client had managed to keep the majority of the weeds at bay that come from the bush and neighbours on both sides.

There were quite a few native species coming up of their own accord which is always a good sign. These species include Basket Grass, Dianella sps, Eleocarpus reticulatus and Smilax to name a few. The brief was to create a naturalistic bush garden in this blank space, using only local indigenous species to the area.

The image above is how the space looks now, the photo is taken from the exactly the same angle so you can really see how many plants and materials have gone into the space. A dry creek bed that runs along the base of the small sandstone cliff and winds through the garden to end at a pond. The line of the creek bed gives the garden well needed structure and splits the space into manageable sections of planting. ECOlibrium Landscapes built the dry creek bed and pond. In the image above you can see the stairs leading down to the garden, the path is mulched and has been marked out with prunings from the mature Eucalypts onsite. This path meanders around in a loose loop shape crossing over the creek bed with 3 large boulders. Once the plants have grown up a little the timber edging could be removed however at the moment it is protecting the smaller species from being stomped on. The very large Angophora costata trunk you can see on the left above was on its last legs and becoming a danger, however it was the most beautiful tree in the rear garden and the client didn’t want to loose it. Now it has been turned into a habitat tree with 4 nesting boxes inserted internally within the trunk and branches. Check out http://www.sydneyarbor.com.au/habitat-creation.html they are the arborists responsible for such an ingenious idea, now the tree can still stand and be enjoyed by all. We found many critters already happily living in the garden like this Broad-tailed Gecko, Funnel Web Spiders, dragon flies and native bees just to name a few, oh and a brush turkey whom we hope stays away!

The plants selected for the garden were local species found on sandstone soils of Ku-ring-gai Councils municipality, most of these plants will be found growing underneath large trees. This is very much a naturalistic bush garden, the ability to view it from the courtyard above has been a large driving force in the overall ‘design’ of the garden even though it is ‘informal’. Viewed from above you can see the islands of plants and the repetition of the species planted. As there was a lot of rock and plenty of decomposing tree stumps I used some Dendrobiums to utilise these spaces for planting. The client will now have a reason to go down those steep steps and wander through the garden, pulling a weed here or there or stopping by the pond to see if there are any new frogs eggs. There will always be something of interest happening in this garden as it will be home to many different animal species.