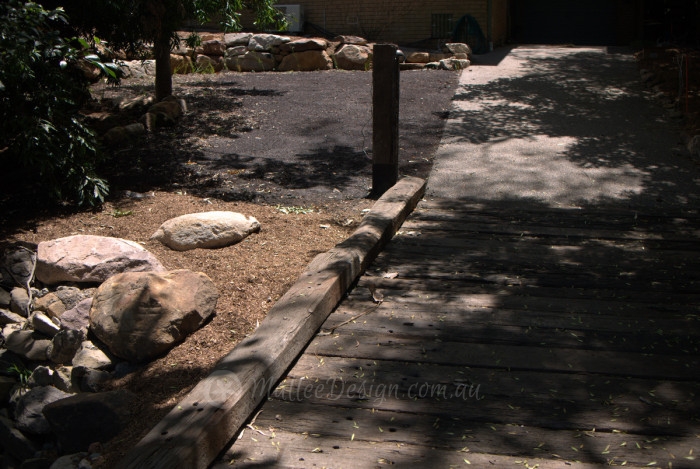 Last Friday I completed the first stage of planting for this local project I have been working on in Mt Keira this year. I have written about this garden already as it is a very interesting brief, using only local indigenous species http://malleedesign.com.au/mt-kiera-site-specific-local-indigenous-species/ . I have been chaffing at the bit since the landscaping began to be able to plant something and it was very satisfying to finally plant out the guest parking area which has had lawn pavers installed. This area of the garden has been completely opened up to allow for onsite guest parking and trailer storage. I laid down Dichondra repens seed and then covered with Seed raising mix, this will turn into a lovely green carpet. Around the edges I planted Hibbertia dentata, Microlaena stipoides and Oplismenus aemulus which will all creep and run over the top of the lawn pavers and make the area look more like a garden than a parking area, these ground covers will also take medium foot traffic and occasional car tyre pressure. The garden has been completely transformed by the removal of a mysterious mound in the front which ended up having two concrete septic tanks underneath. In the image below you can see how much the level has been cut out and replaced with low sandstone boulder garden beds. The sandstone boulders are large, so that they tie in with the existing boulders already throughout the property. It has been exciting to uncover the existing rocks and make them a more visible feature. The creek has also been the recipient of much rock, it needed to be retained and have the flow of water slowed down so that it doesn’t back up on the final storm water pipe which you can see below. Once summer is over I will return to plant out the creek with sedges and rushes in order to try to reduce the erosion above the rocks. One of the main constraints with this garden design was where the driveway passes over the creek, it was narrow slippery and dangerous and not at all clearly marked. I have used re-cycled timber sleepers to create a ‘bridge’ over the creek crossing, with rails and posts as visual markers. The recycled timber posts sit diagonally across from each other and both have outdoor lights mounted at the top. The lighting is yet to be completed, but once finished will aid the driver in reversing or parking in what used to be a treacherous manoeuvre that might possibly end with driving into the creek! About two thirds of the driveway has been re-surfaced, as there were many cracks and dips due to the number of large trees on the property. I chose a product called ‘Stoneset’ to create the new driveway, it is porous and has some movement in it, therefore is a great choice for using in a tree filled space. It also has great grip which is good as some sections of this driveway were a little steep and slippery. We are really happy with the outcome, it works in well with the naturalistic style of native garden and especially well with the sleepers and sandstone. The client has opted for holding off the rest of the planting until Autumn when the Deer won’t be such a problem, I will have to be patient and satisfied by watching the Dichondra lawn appear for the next few months 😉