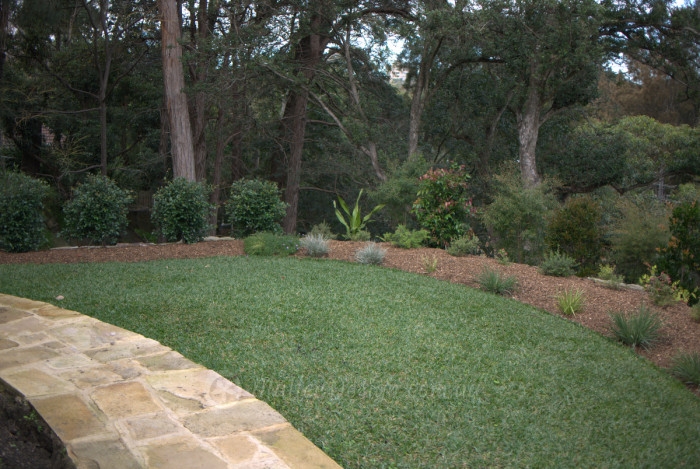 This garden in Crows Nest was designed at the beginning of last year and has been slowly and steadily taking shape. It is being lovingly built by the owner on weekends and through his careful attention and patience it will be a great success. However, unfinished as it is I couldn’t resist posting a few photos…. The garden is in three fairly well defined sections, the photo above is of the rear, which is a small area in a formal style. I relished the chance to put some natives into a more symetrical lay out and must admit I can’t wait to see some of these neatly clipped.
The main feature of this garden patio are the Grevillea ‘Green Glow’ Grafted Standard on the left and the two Grevillea candelabra Pinks (see below) framing the sliding doors, which are also grafted. The second area is a terrace garden with a beautiful back drop of the neighbouring bushland park’s mature Turpentine. The lawn is set on a curve (and may be removed later) and the garden beds follow this line with grassy and tufting plants in front, Grevillea ‘Honeyeater Heaven’ as the middle layer and a mixed panting of Syzygium ‘Backyard Bliss’, Leptospermum and existing Kunzeas in the rear. The bottom part of the garden which is also the street frontage is very steep with sandstone outcrops and some block retaining walls, it is very shady and sometimes moist. This area is yet to be planted out and will be treated more like a Bush Regeneration project.
Plants such as Epacris spps, Austromyrtus dulcis and Breynia oblongifolia will be used as under-storey.
More images to come!