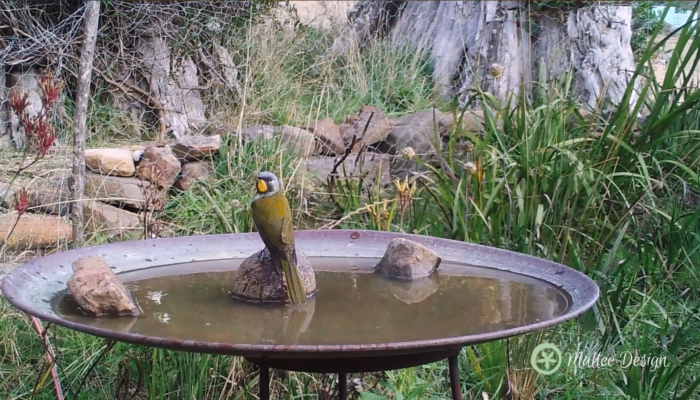 Our friend Angus Stewart in Tasmania (from Gardening with Angus) recently captured all these wonderful birds making use of his Mallee Dish – including a few that we’ve never seen before since they only occur in Tasmania.

In this video you will see:

The star of the show is the Yellow-throated Honeyeater easily identified by its sunshine-bright yellow throat and olive back. They tend to to travel alone or in pairs foraging for insects and drinking nectar from flowers primarily. During breeding the females make a cup-shaped nest in the mounds of low growing grasses like Lomandras or other shrubs using cobwebs, sticks, vegetation and mammal hair (including human hair) to weave it all together.

Next is the Eastern Spinebill, another honeyeater, that can almost hover like a hummingbird, and has a fast-paced flitting flight pattern. I like to think of them as the ‘tuxedo birds’ since they look so dapper with their orange breast, white chin and shiny black coat. They occur all along the east coast and can be a fairly common visitor to suburban gardens, once some nectar-rich flowering natives have been established.

New Holland Honeyeaters have the black and white-striped undersides and can be seen huddling together in the video. The corroborative behaviours of these birds are not entirely understood but one theory is that neighbours can use repeated calls to gather, identify each other and establish territories. They also use repeating calling and posture to get together and mob predators such as snakes or rival birds during the breeding season.

The Superb Fairy Wren is the next bird to enter the scene, and while the males look the most promiscuous with their majestic blue plumage it’s actually the females that may sleep around with over 10 males an hour during breeding time. The breeding males only have their blue feathering through winter/spring, in late summer they moult and after often mistaken for females. You can tell the non-colourful males apart from their female counterparts by the colouring around the eye and beak. The males have black beaks whereas females have tan beaks and tan around the eye.

Green Rosellas are another Tassie endemic bird that enjoyed drinking from Angus’s birdbath. They tend to gather in small groups and feed primarily on the seeds of grasses and trees like eucalypts and wattles. Planting these groups of plants is a great way to attract rosellas and other parrots local to your region.

Next seen were the Grey Fantails, insect-eaters that are constantly flying up into the air to capture their next bit of prey. They do migrate between Tasmania and mainland Victoria, but not always. The Tasmanian subspecies has more white in its tail than the fantails confined to the mainland.

Then one of the most vibrant-breasted robins around – the Scarlet Robin! Robins also have a taste for insects but they are not quite as crazy-active as fantails. In Tasmania their population is considered stable but in NSW they are vulnerable species threatened by habitat degradation and predation by cats.

And finally a large flock of Silvereyes can be seen gathering in the dish at the end of the video. During breeding and through the winter months Silvereyes tend to gather in large groups and they can migrate a very long way for such a small bird. Silvereyes from Tasmania sometimes travel all the way up to southern Queensland at the end of summer, and there is a lot of variation in colouring across birds from different areas (Tassie Silveryes have tan flanks and greyer throats) that can tell you whether the silvereyes you’re seeing are a local or migratory group.

For more information on birds checkout Birdlife Australia‘s resources and/or get yourself a copy of The Australian Bird Guide. These are both great places to start in getting to know your birds, apart from of course being out in nature and watching them!